Other Things to Do with Deltas

Hang them up indoors 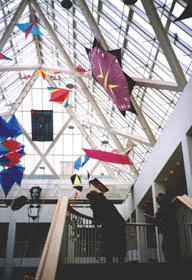 Dr. Whirlwind's 10th rule for fixing a kite that doesn't fly is to do the exact opposite of what you think would work. It's surprising how this can sometimes prove to be true. I have one very nice looking 11ft. 4in. delta here at home that doesn't fly right, but I don't have the space to hang it up all the time - that's about all it's good for. I need to experiment with it to see if I can fix it...

Matsutami once told me if people merely hang his hand-painted kites up on a wall, it makes him cry. The reason for this is that it's the easiest thing in the world to make a "fake," or toy, kite - one that doesn't fly (It might sell, though!)

It's a very much more intense prospect to make such simple structures so perfectly well that they not only fly, but fly straight and true. Every part has to be just right. 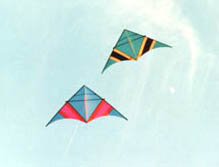 Every now and then I hear from an excited customer who has changed the stock frame parts on a delta to something else and the result is something wonderful. Customizing stock deltas can produce outstanding flyers with improved performance, but you have to be careful. You might find that by changing the fiberglass wing spars to expensive carbon makes the kite no longer fly, because deltas need wing spars that flex a certain amount in order to fly. Choose replacement rods or tubes not on the basis of matching diameter but rather on flexibility. Some extra stiffness might be acceptable, but too much can make the kite difficult or impossible to handle. For example, popular custom wing spars to replace the 5mm fiberglass in Little Bears and XFS Deltas are 4mm dia hollow carbon tube. 6.35mm carbon tube replaces 8mm fiberglass; 8mm carbon replaces 10mm fiberglass, and so on. Just be certain the ends are filed round and smooth.
Glasforms (precision-ground filament-wound epoxy) tubing is a wonderful material for delta wing spars. I wish it was more readily available here. E-40, for instance, makes a very good replacement for my stock 6.35mm fiberglass. I prefer it to carbon, because it gives such perfect flying qualities. I don't know why; I think it's a mix of weight and just the right degree of flexibility.

Center spines don't do much other than stretch out the kite and give the centerline a gentle curve, or camber. If you have a kite that's stretched and gone a bit slack, slip out the spine and ram a small, say pea-sized, ball of cotton (cotton wool) down to the nose, using the spine as a ramrod. There's not much point in replacing the center spine, unless you really want to trim every fraction of an ounce. Chances are you couldn't measure much difference in weight between a dowel spine on a small kite and its carbon replacement. Spines of man-made materials need end caps of some sort, because they're a tight fit, but vinyl end caps make them very hard to get in and out.

An obvious little job to do would be to weather seal wood spreaders. Oily stuff can stain the fabric. Use something that dries. 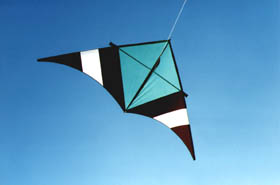 This prototype has both carbon and fiberglass wing spars, and both wood and carbon spreaders. It can be tailored to the wind, and as yet I have no preference for one or the other setup.

When replacing spreader struts, there are several considerations. The replacement should not be heavier than the stock part. Lighter-and-stiffer is better. It makes sense to replace spreaders with lighter carbon. Whatever the replacement is, it really should be at least as stiff as the original, and preferably stiffer. Spreader flexing causes mushy handling; it makes the kites less responsive.

But that's not necessarily always a bad thing.

There is an alternative approach to spreaders I don't use much (in the past I have used thin fiberglass, the same size as the wing spars, on small deltas). Although there is already flex from the wing spars, a flexible spreader allows the whole kite to give in gusts. Kites set up this way tend to sit back at a lower angle and remain fixed at one position. There is certainly scope for experimentation here.

Fitting spreaders is fairly easy, since they don't fit tight, and there is a rule-of-thumb to help get it the way you want it.

You need a tape measure, a calculator, and a place to hang the kite upside down for this. The fit is based on a simple measurement - from the point of the kite's nose down to where the centerline of the spreader (or its pocket) intersects the leading edge - in other words, from the nose to the spreader location. The fit depends on taking percentages of this distance.

Follow this link to a page about customizing Trooper spreaders for stronger winds.

With the assembled kite held or hung upside down, measure the off-clearance, the gap between the surface of the kite and the spreader to adjust the fit. You are looking for a clearance equal to your chosen percentage from the previous step: 12, 14, 16% - whatever. Experimentally tighter spreaders are an option here - Clippers with tight (well-curved) center spines are good candidates for 8 to 10%. (Kites with anti-flex spreader supports on top are not. It's logical to fit these exactly; however, a looser fit can be accomodated by replacing the rubber loop with cord.)

Sending things up the line

In the early 1900s a man named Goderius used a trolley with a releasable sail to carry (and trigger) a light camera up and down kite lines. The principle is that the wind blows an object up the line, say a small parachute, attached to a simple trolley device, which then bumps into a stop attached to the line and releases whatever had been attached. This is a Round Pond climber made by Nigel ("The Butcher"). It's wood: 2 3/8 x 1 x 1/4 inch; plus coat hanger wire and two small screw-eyes from a picture frame. You hook the screw-eyes onto the line, and the parachute creates enough friction on the wire hook to keep the device closed as it climbs.

I don't recommend stuff that can interfere with the handling and maneuvering of the kite and line, like banners and windsocks. You're just asking for trouble, especially if someone crosses your line, or you need to reel fast in a lull.

A split plastic cup on the line can act as an effective sound amplifier - interesting when the line is singing. 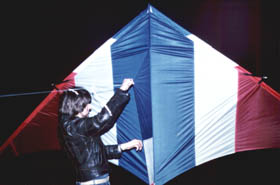 ...As for flashing lights, LEDs, strobes, etc.; well, let your imagination run wild. Night flying can be fun. A medium-sized kite will easily lift a 6oz/175g strobe; all sorts of high intensity LEDs are available today. There are little fishing rod lights, too. I found an emergency strobe on sale and fly it high at night, attached with a Prusik knot. Some kite colors light up nicely from behind, so a light could be on the back of a kite, turning it into a giant lampshade. See the "Prusik Knot" on the Knots page. A loop of cord tied to the light can be quickly attached to the flying line with a Prusik knot.

Kite fishing - I'm way out of my depth here. I know practically nothing about it, other than that it's done with smallish kites, flown on fairly heavy line, flying at a very low angle a long way out. Certain deltas would probably be good for this - as always, using the right kite for the wind.

This is a subject about which I know very little, but it dates back to the very first trans-Atlantic transmission by Marconi. Many years ago a south London-based pirate radio station used a Roller I made for them with a fiberglass frame to do broadcasts from different locations. Two or three customers have since mentioned hoisting radio antennas; one mentioned two kites lifting two aerials side-by-side; another mentioned using braided line with a wire core as an aerial, but, other than that, I have little else to contribute (sorry). But I have this link to the website of ham radio operator Adrian G. Hanna, GI0SMU: KITESANTENNA, which shows just how it's done (it doesn't use a delta, but that's forgivable). 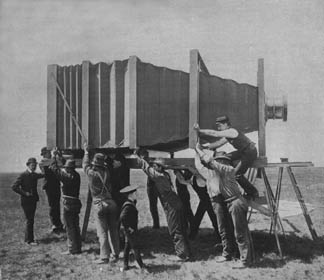 An ever popular thing to do with kites is make up a rig to carry a small camera aloft.

The photo shows one of George Lawrence's 5 x 8 cameras - that's 5 feet by 8 feet - with a 10" diameter lens. Lawrence used a team of 15 men to handle his giant cameras, which could weigh 1400 pounds. He had special railroad trucks to haul his gear around, and in addition to his huge landscape photographs used a train of 17 huge kites to photograph San Francisco after the devastating earthquake and fire of 1906.