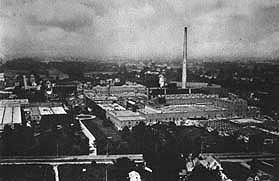 Bird's eye view of Kodak Park, Rochester, New York, 1907, made with a small, lightweight camera loaded with flexible film. Kite about 6' tall; camera at about 500'

The latest quick advice: get a small rotating rig from KAPShop.com, and use a small, fully automatic, action camera such as a Veho Muvi HD Pro. Large kites, such as the R8, are not necessary. Of my own kites, the Wildcard has been mentioned as highly suitable. Others with the same wing spars—R7 and M7, and Whirlwind for lighter winds—would also work, as long as the right kite was chosen for the prevailing wind.

In the near future all these kites will need to be converted to other (either carbon or fiberglass) wing spars, because the standard 6.35mm fiberglass tube is no longer being produced. 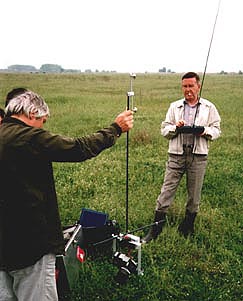 Lifting cameras and other stuff

If you want to get a bird's eye view, you can use a kite as a kind of monopod. This subject is covered in great detail in other parts of the web, so I'm only going to cover it briefly.

I like a simple pendulum rig. You attach the rig to the line rather than to the kite itself. This way you can choose the right kite for the wind, and it doesn't have to be a special, modified kite. Relatively heavy kites don't fly well or are borderline stable; fixing a weight directly to a small, light kite effectively turns it into a heavy kite, creating its own set of problems. To avoid adversely affecting stability the kite ought to be big enough so that the camera system only increases the kite's total weight by a small percentage, and then the location of the camera rig would have to determined experimentally. Attaching the camera rig to the kite line avoids those difficulties, plus it allows you to get the kite flying at a height where it gives more lift than at ground level. 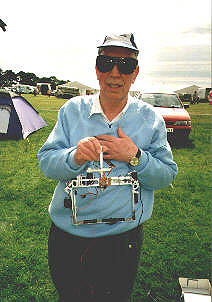 When designing an aerial camera rig, try to keep it as light as possible. It takes a monstrous kite to lift heavy weights. Aim for an all-up weight of under 1.5 kg for a light SLR (like a Canon T-70) plus a 28mm lens, on a radio-controlled outfit, as shown here at right. This one rotates and tilts with precision.

Maurice Sawyer's rig (right) also rotates and tilts, but he has had his fixed-lens Yashica T-4 camera fitted with an electronic release socket by Yashica UK, so the shutter can be triggered directly by electrical impulse. Maurice uses a tiny electronic device originally used for releasing "bombs" from radio-controlled model aircraft, which has allowed him to eliminate the considerable weight of the servo and batteries normally used to push camera shutter buttons. 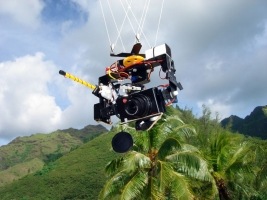 These days digital photography is the norm, and modern camera rigs look more like this one from Flicr. Note the tiny video camera that gives precise aiming.

Needless to say, being able to assess photos immediately in the field is immeasurably useful. Good quality digital compacts weigh much less than SLRs, but image quality is quite satisfactory. With a really small digital camera the job can be done using smaller and more manageable kites, too, with the whole system less cumbersome and more portable.

Click on the photo at right for an enlarged view >>>

"The whole process of kite aerial photography is rather unpredictable, since you are never sure quite where the camera is pointing." - Neil McManus

Unpredictable, that is, if - like me - you don't have a mini videocam for aiming.

For my aerial photos, I also use a fixed-lens compact (or point-and-shoot). These are lighter than zoom compacts and, more importantly, their lenses are faster. The Samsung AF Slim I use has a built-in interval timer, so it takes its own pictures every 1, 10, or 30 minutes without the need for any sort of remote control. I aim it from the ground, by sighting along the kite line. I tilt it a few degrees below the horizontal to include some horizon and release it, whereupon the line carries it up into the blue yonder. But not too far; the pictures usually look fine with some foreground. There is plenty of time between exposures to walk the line down and point the camera toward a different view, even at one minute intervals. Aiming this way, with a line clearly scribed across the sky for you, is arguably more accurate than radio-controlled rigs. With a distant radio controlled cradle, you can't tell exactly which way the camera's pointing; it can easily end up pointing 180 degrees in the wrong direction, as happened with a friend's rig. 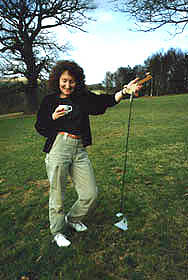 The simplest rig could be an alloy tube with a single small wooden knob bolted on at the top and a 90°plastic bracket at the bottom to which a cradle allowing for pan and tilt is attached. The longer the pendulum arm, the steadier the camera (and vice-versa!) Once the kite's up and flying, attach the rig with a quick Clove Hitch. 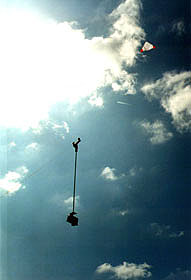 Here where I live, the wind is rarely ever steady. The popular self-levelling Picavet suspension rig wouldn't work in the rough and turbulent winds, where dives can't be ruled out. Sometimes my whole rig is upside down. A Picavet suspension rig - where the camera is hung from a cross-shaped framework suspended by strings that slip through rings at the four corners - would end up in a big tangle.

I have seen a smooth, steady Picavet rig in action, and can see why people like them, given the right conditions.

I use a simple pendulum rig. The longer the arm, the slower the natural frequency of swing. Sometimes, when the kite drops, the pendulum is completely upside down, but it stabilizes itself nicely. My camera cradle is cut from a scrap of 4" plastic drain pipe, on a friction-damped carbon pendulum. I also made a rig that used the same cradle, but instead of the long pendulum it had a large vane to prevent swaying. With this one I found that as the kite moved from side to side the vane tilted the rig. Also, cross-winds tilted the rig. The desert road picture was made with this rig, however, because it was more portable. It was fine only in smooth winds, if one didn't move too quickly along on the ground.

Here are a few of my aerial snaps. 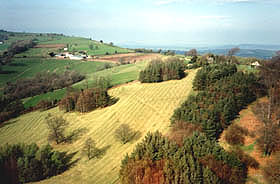 This is where I do my kite flying.

These snaps were all made using my simple rig and the camera's interval timer. 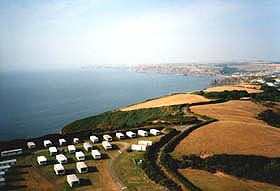 This is looking north from a camp site adjacent to the coast path, less than a mile up from Littlehaven. 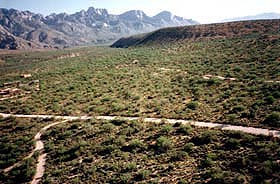 This is the entrance to three of my family's residences, looking south toward Pusch Ridge in the Catalina Mountains. 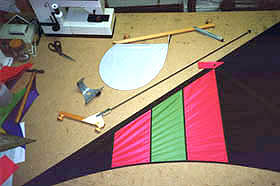 These photos were made using either the pendulum rig or the vaned rig (at right). I found the pendulum to be the more reliable, because in use the rig with the stabilizing vane tilted in cross-winds or whenever the wind aloft changed direction. The camera is fixed to the adjustable gray cradle, which fits both rigs.

More of my aerial photos 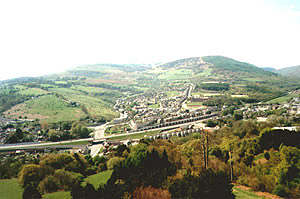 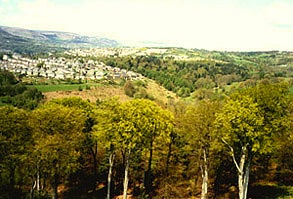 4 bird's-eye views from above the hill in Pontypool Park 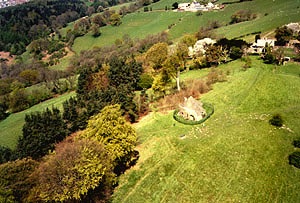 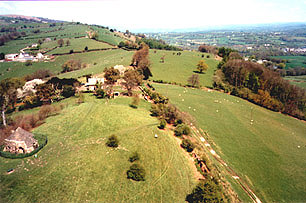 This round hut is an 18th century hunting lodge, used these days for poetry readings, story telling and folk music. The interior walls and ceilings are completely encrusted with sea shells and rock crystals, while the floor is intricately paved with the knuckle bones of deer and pig! 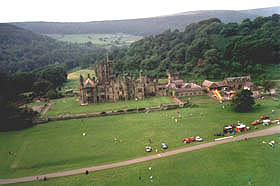 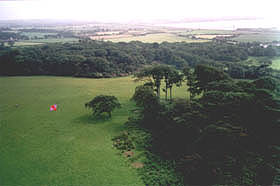 Margam Park in South Wales photographed using a radio-controlled rig on loan from customer Trevor Deary. The camera was an old Olympus compact; the kite was an R8.

Trevor specializes in aerial photos made in light winds, where there is just barely enough pull to hoist the camera. Trevor maintains this is the best way to achieve a steady camera support - "the lower the line tension, slower the rig will react to line movement." Gently does it. Trevor says: "a line rigid like an iron rod will rattle the rig and blur the pictures." Trevor prefers a lot of sag in the line. That said, he also tells me that if there happens to be a lot of wind, he'll still have a go, using fewer kites. Even though the wind bats the rigs around in brisker conditions, he still has a 95% success rate. 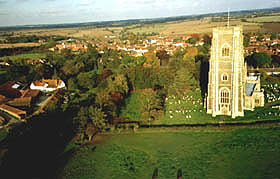 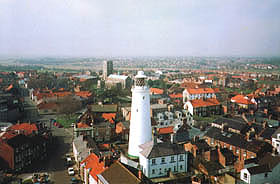 At left is a Trevor Deary photo of Lavenham, Suffolk, made using a train of two 6 foot deltas with extra fringed trailing edges. Camera: Ricoh FF-9. 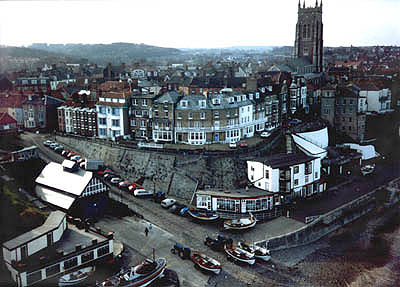 Above is a low-level aerial view of Cromer, Norfolk. Trevor used a Ricoh FF-9 loaded with ISO 200 color print film.
With fully automatic cameras using a high ISO is the way to get the fast shutter speeds best for aerial photography, where the camera is often in motion. 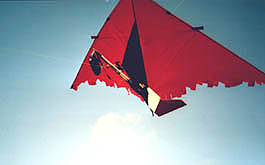 Trevor Deary is an aero-modeller with distinctive ideas for camera rigs. The camera is on a rotating mount at the front of a balanced rocking beam with an aircraft-style tail at the aft end. This helps keep the camera steady in a steady breeze.
Trevor has had a great deal of success with this and successive versions, the latest of which has what he calls an "autopilot stabilizer."
(Kites rise and fall, and move with the breeze from side to side. Rigs with plane surfaces will inevitably aim the camera up or down or to one side during these natural motions; hence the need for some system of compensation.) 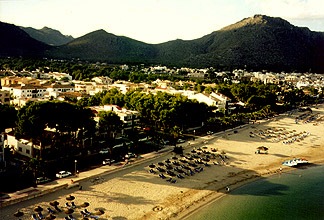 Trevor prefers smaller deltas. He advocates using the least amount of kite as practicable. He uses just enough kite to lift the rig and no more.

I prefer a larger kite, one that I can anchor, that'll fly on its own, and keep flying independently as I walk the kite down to retrieve or reposition the camera. My camera uses a built-in interval timer - there's no remote control. I have the kite up high enough to keep flying as I walk the line down to access the rig; then I simply let go and the rig rises again. I don't want to have to keep moving upwind with the kite line to keep the camera off the ground; I prefer a kite with enough lift to handle both the camera rig and my walking the kite down. So I don't worry exactly which kite I am using, just as long as it's the right lite for the wind.

Trevor uses one, two, or more small- to medium-sized deltas, depending on the wind, linked together on a single line. When using more than one kite, each upper kite is attached at the middle of the lower one's spreader strut, where an extra loop of strong cord stops it from bending and pulling out. This loop goes around the spreader, through the wings, and around the spine. Trevor has been using these kites and this setup for many years now, and he says the system is 100% reliable.

Only a few kites can be joined in this way. There is a significant compounding of pull and the main flying line is necessarily heavy. All the the force of the pull has to be carried through the fabric of the fins, where there is little or no extra reinforcement. This limits the number of kites that can be practically linked together in this way.

If having multiple kites on one main line interest you, then go to...

The KAP shop offers a range of products for kite aerial photography including custom-made products, plus balloons, blimps and masts for windless conditions. They ship worldwide

Cityscapes, landscapes and archaeology, plus a nice gallery of new and old deltas made by us:
Alan Denney Gallery on Flicr
Hint: hover the cursor over the lower left hand corners of the kite photos