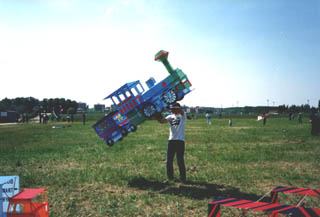 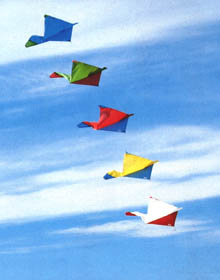 Trains of kites are several kites linked together or attached in some way to a single line. Trains provide a lot of lift; many small kites can exert more pull than one very large kite on its own. Trains can be useful; they're visually interesting, and long trains are quite steady - with reservations. The earliest reference to trains I am aware of is to be found in G.T. Woglom's book Parakites, from the 1890s. His system had a main line with kites attached to it on long separate individual flying lines at large intervals. Each kite was chosen to suit the wind at its working altitude. He used such trains to lift an 8x10 (glass) plate camera to make high quality kite aerial photographs some years prior to the invention of the airplane and practical airships. My experience with deltas attached using Woglom's method was rather less successful. One kite was in a layer which went dead, and the kite soared around and dropped. The others went off in different directions. Before I could get them down, which was confounded by the fact that you had to fly all the kites at once, and this proved impossible. One kite might over-fly when the line was reeled in to save the one that was dropping; letting out line to get another kite back on line would inevitably lead to another stalling. Charlie Brown isn't the only one to drop kites into trees. With a train, the whole lot can end up draped over the nearest stand of timber. 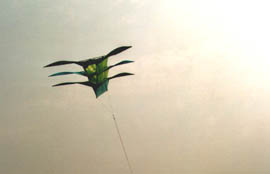 Having seen a different setup in action, which used four to six delta kites linked, about a meter apart, with strings at nose and tail, and at the spreader attachment points, I made a new setup. The idea here is that all the kites fly as a unit. This looked much better to me. So I tried linking the centers and spreader pockets of three deltas using Dr Whirlwind's method. This proved to be another old-timey comedy whenever I attempted a launch. Ground-level turbulence would take hold of the kites, initially neatly propped up down wind, and before I could ever get them launched they'd be tangled up in one enormous knot, which would take literally hours to disentangle. Eventually I took that train completely apart, and built the wings onto an elongated central V-section, ending up with a triplane delta. No strings, excepting the triple-leg bridle. (It pulls so hard it distorted the spine with just two legs.)

This kite brought home the fact that here was a large bundle of sticks, very complicated to make, yet no more efficient than one biggish delta, which would be easier to handle in the air. Existing wings are no problem; almost any delta wings can be used. But it's wise to choose a narrow nose angle - with any delta-winged combination on central cells, the right stock sizes for all the spreaders may not be available. Available spreader diameters have to be sorted out before one starts on one of these designs.

"The first thing one does is to find a good solid anchor for the flying line. Thereafter he he may contemplate flying this monster. Though well-behaved it will lift you out of your boots in short order. I'm now building a 3/4 scale version of this kite as the full-size version is just too damn much kite for a sensible fellow, and at first I am going to build only 3 stages. that may be as much as I want to fly."

Note the "pilot" kite at the top. Trains need a small kite flying at some distance up to keep them on an even keel. The pilot is flown on regular light line; the main line for the train itself must be fairly heavy-duty. In Thorsten Schact's train, the line tension is carried through the kites, not by the kites.

There are small holes (some people use longer slots) in the wings alongside the center spines, directly above the towing rings on the fins. A long loop of line is attached to each towing ring; first one end, then it's fed up through the hole and down through the hole on the other side of the spine, and tied to the ring. The next kite along is attached to the loop of line, at a distance of about 20% longer than the kite's root chord (the length of the spine). There are also strings connecting the spreader pockets. These are to stabilize the train, making sure it flies as a unit. 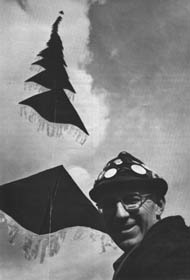 The actual location of the towing points is important for trains; light wind towing points are too far back. Trains made with regular standard deltas may go floppy, that is, some of the kites will just hang there. The solution here, at least the way Trevor Deary does it, is to attach the successive kites to the spreader of the kite below. To prevent the spreader from being pulled free, there are extra loops of string around the kite's spines and spreaders. The better delta trains I've seen - (the late) Jack Van Gilder's in Washington (state) and Thorsten Schact's in Denmark - used kites designed for breezy weather, featuring forward towing points, longer-than-normal fins (Jack Van Gilder called his "oversized"), and extra trailing edge drag.

The Van Gilder train didn't have the extra outer lines connecting the spreader ends, and differed in other ways, too. The kites were attached to the main line with a short (12") tether, to allow for twist in the main line. The main line thus pierced the kite a bit further forward, and a slot gave flexibility of flying angle. Jack used a tiller hitch to attach one kite to another in the train, so individual kites could be removed from the train if necessary. Jack regularly flew over 100 46" span delta kites this way single-handedly.

Train kites are kept in line if they have an extra fringe or flap on the trailing edges (tails can tangle on the main line - remember Murphy's Law). This helps all the kites in the train behave; they won't be going off on their own like a single scalloped delta might. Trevor Deary had kites specially made with extra fringed trailing edges for his two aerial photography kites.

I thought I'd try a different method of linking two or three kites together, and it worked up to a point, but was flawed. My idea was that, since there is a mathematical definition for the towing point, then it follows that it could also apply to a small fin on top of the kite, for attaching successive kites on longish lengths of flying line.

The flaw was due to the towing point position, or using the same one for the top finlet. These turned out to be too far aft which meant that the lower kite simply had no wind in its sails and would often hang limp. I thought the line of force would pass through each kite in a nice line; but instead, each successive kite would fly off the lower one as if at were a separate anchoring point. This is best shown in a drawing.

It did work in light winds, with very long lines, but closer together the method didn't work well. The upper kites needed to be attached further toward the kite's nose. Now, I thought this would have made the upper kites pull the lower kites around backwards, but it doesn't. So, I figure that the top fin idea would still be effective, but only after finding the right position for it first. The advantage of such a system would be simplicity; the kites wouldn't tie themselves into knots, but it wouldn't be for dozens or hundreds of kites, because the line tension is passed through the kites' fins, rather than being carried by flying line. Woglom's method is the only way to use ordinary kites hooked together, each being on its own flying line, which is attached to a main line. In his book, Woglom describes a little stick arrangement to prevent the secondary lines from twisting around the main line.

Though my enthusiasm for stacking several deltas on top of each other has temporarily waned, I still like the idea of having little fins on top of deltas for attaching second and perhaps third kites to.