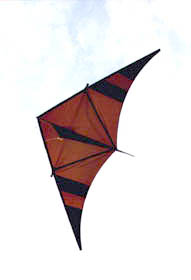 Instead of associating "kite goes up" with pulls on the flying line, it should be "kite goes in the direction it's pointing." This is how fighting kites are controlled, and it’s the way all kites are handled.

They can also go sideways or down as well. Kites move in the direction they're pointing when the line is pulled. At launch they're pointed up; winching is constant pulling, so it's up they go. Then, when winching them down from a steady-state flying position high in the sky, they come forward - in the direction they're pointing. At altitude drag on the flying line is usually enough to prevent over-flying, but as the line is wound in the kite creeps forward until at some point in its approach it can go beyond the vertical. Stop reeling; allow the kite to settle back. This is the basis for all kite control: releases to aim the nose combined with well-timed pulls.

The kite's behavior when pulled too far over the vertical it is more important than whether it does it. Ideally kites should remain dynamically stable, but some otherwise excellent kites won’t turn around - they do luff stalls or dive; other kites readily turn back downwind and reposition themselves. After an over-fly, stop reeling, allow the kite to turn, coax it downwind with the reel, stop, let it turn forward again, and so on.

Momentum tends to keep kites going whenever they're turning or diving. Small or lightweight kites recover quickly, stabilizing themselves easily and efficiently. Frame weight goes up with the square of the radius of the frame parts, so bigger or heavier kites have proportionally more momentum, and therefore need a bigger chunk of sky to recover from upsets. But, in practice, it's usually the kite with a bit of mass that is best to fly overall. Super-light kites float so well that it can be hard to get them to respond at all, while a kite with a bit of mass will drop back the instant you push the line out.

Add-ons like trailing edge flaps on deltas add extra drag, restricting a kite's agility and speed, but some flyers feel uncomfortable with a lively, zippy kite, so I also make kites with some trailing edge drag. They fly with hardly a hint of a turn to either side, ever, and hang in there through fair winds and foul. They have their place. They are well suited to blowy days. I also use a long, weighty, draggy tail if and when the occasion warrants it.

I don't regard over-flying as a "design fault" that might have been correctable.

A kite buoyed up by a passing thermal will follow the lift, wherever it takes it - when the kite slips off the thermal it could be well beyond the vertical. The end result can be similar to over-flying, but the sudden fall from height, as pull vanishes, may be quite a bit more dramatic. This isn't the kind of normal over-flying considered by some to be a "fault" of the kite.

As I understand it, what some flyers refer to as "over-flying" is when kites fly beyond the vertical, mainly when being brought down for a landing. Any kite can be induced to over-fly when winding it in, even kites like hexagons with long draggy tails - it just depends largely on how fast it's being wound in.

One Japanese writer says that the proper way to bring kites down is to talk constantly to them, and while doing so let out one turn of the line for every three you wind in.

To me this is not a fault; it’s just kites; it’s what they do. As I see it, the problem is one of thinking, not kite design. Kites go in the direction they’re pointing when the line is pulled. That’s why kites climb, and how kites are controlled. If while launching a kite one were to continue reeling like mad the kite would continue beyond the vertical and nose-dive into the ground upwind of the flyer. It’s no use calling this a fault. If a kite flies normally at all other times, then over-flying has to be the fault of the flyer, not the kite. The flyer is adding too much to the relative wind. What the kite does in such situations - how it behaves - is what matters. Some kites stubbornly refuse to react at all, while others respond to control inputs like eager puppies.

After a launch, kites eventually find a stable position nearly in line with the oncoming wind and as long as no more line is let out or reeled in it will sit there.

Relative wind is the wind as seen by the kite including both the ambient wind and the secondary effect of the flyer pulling in or letting out line. Nearly everyone knows the way to make kites go up when there isn't enough wind is to run with them. Sophisticated flyers use large diameter reels to winch kites up: the kite is propped or held up some distance downwind for the launch. Auxiliary wind for the climb is then generated when the flyer starts reeling. This secondary wind component, generated by reeling, is in line with the ambient wind. Initially the total relative wind comes from below from the kite’s point of view. By virtue of its bridling, the kite has an innate tendency to move in the direction it's pointing. As it climbs, the kite sees the relative wind gradually shift in direction from directly beneath to almost directly in front of it, at which point it settles into its stable flying position, at (theoretically) 90° minus the angle of attack.

So far, so good; but when the flyer wants to bring the kite down, he or she starts reeling, and at some point in its descent the kite may fly beyond the vertical. The new secondary component of the relative wind, provided by the flyer, is at a right angle to the ambient wind. Added together, these two components give rise to a relative wind, which, as seen by the kite, comes from an angle below and to the front - similar but not identical to a situation it passed through on its initial climb. Gravity intervenes, ideally, and with luck or skill the kite will swing around when given a chance. It is also challenging to hold a kite at a seemingly impossible position for as long as possible during retrieval.

There have been some classic "cures" for the over-flying "problem" over the years. The first one I encountered was Bob Ingraham's development of his slotted trailing edge for the A.K.A. 10th Anniversary Delta. This is unquestionably a fine all-round delta, but years ago when I made one, I found I didn't like the way its motions were damped - the handling was sluggish, and its potential seemed to me to have been severely restricted by the "cure" for something I don't consider a fault in the first place, and at the time I didn't think it was worth it. The same kite without the slotted trailing edge apron was a kite set free, in my opinion. It was responsive, snappier, more agile, climbed as fast as I could reel with a deep-sky reel, and would turn and move when I wanted it to. It got to a better flying angle as well.

Another delta touted by its maker to be the ultimate non-over-flying delta is Ed Grauel's "balloon-keel" delta. This is a direct descendant of his Open-Keel Delta, or OKD. I have seen various sizes and constructions of this design (OKD), and its geometry is representative of a different philosophy altogether from the sort of delta I usually fly. It can be an excellent strong wind design, if built in a certain way. It has a towing point so far forward it wouldn't fly at all if it had a conventional fin. In light winds, it sits at a very low angle. It will get a good angle, though, and fly in a vast range of winds. (The OKD is well worth experimenting with. The version in Ron Moulton's book is different from the versions in Margaret Greger's books and different too from those I received from Ed himself.)