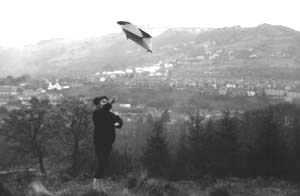 The March 1974 issue of "Sunset" magazine contains an article on kites including a plan for a plastic Ed Grauel open keel delta (with a fin as well). Along with Wyatt Brummit and James Vullo, Ed was a member of that group of innovators and experimenters at the Long Meadow Chapter of the A.K.A. whose exploits, as reported in "Kite Tales," inspired me to break away from published plans and start designing my own stuff. 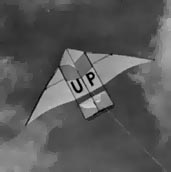 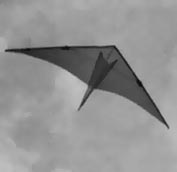 A pair of Wyatt Brummitt kites circa 1975.

A tunnel keel is a single, full-length V-cell. It was several years before I saw the "Sunset" article (thanks to Margaret Greger), so Wyatt Brummitt's "Tern," (above right) is the first delta with a tunnel keel of any description I can remember seeing (both photos: Kite Tales, Autumn 1975). The Tern also gave me the ideas for high nose angle deltas and extended keels. That same photo spread also features Wyatt Brummitt flying a "boxed delta," and James Vullo with a V-celled bird (that looks deltoid) and a delta with a cylindrical fusilage.

The tunnel keel delta is greater than the sum of its parts; somehow these kites seem to perform better than their size would suggest. Although they can still have fins, I usually use an adjustable bridle. If one feels like experimenting a little, this can have an elastic segment incorporated into the rear leg to give a sort of automatic adjustability.

A key factor to take into account from the outset is the ultimate length of the finished spreader. Adding the panel between the wings adds significantly to the overall width the kite would otherwise have been, so spreaders have to be quite a bit longer. Therefore it's sensible to go for narrower nose angle wings: 90 to 96 degrees.

The usual cell pattern compounded with delta wings is the triangular box. These have an advantage in stronger winds, but introduce certain construction problems, for instance: the attachment and exact fitting (lengthwise) of the center (lower) stick - tensioning the cells neatly. And: the central hole between the two longeron sleeves leaves a gap in the wing tensioning, which some people cure by filling the space with a mesh panel, but which can require a switch to heavier longerons. The mesh, incidentally, also helps the front edge of the top panel of the rear cell, which would be in turbulence and flutter, or catch the wind and blow back.

Also, on some pilots I have seen the maker has not sewn the left and right wing panels onto the cells in any sort of proper alignment. I suggest putting tooling holes in both longeron sleeves as well as the cells, and using these to align the parts - not the edges (or corners) of the cells, which may be hemmed (or even cut) unevenly. The tunnel keel design neatly sidesteps all these difficulties. There's no turbulence, no drag; the wings are tensioned evenly, and the central spine goes into a sleeve just like a regular delta.

The plan below shows a typical tunnel keel. (The front appears foreshortened in the side view, but the angle of the cut of the front opening is about 45° on the flat.) If you look closely at the photo at the top of this page, you'll notice the back end of the tunnel part is cut parallel with the front - it sticks out at 45 degrees; this works on a small kite when the grain direction is in line with the opening. There aren't any hard and fast rules here. The front of the tunnel could be cut back at 30°, say, or even 90°. I simply prefer them closer to 45°. The proportions can vary too, but I prefer the cell sides a bit narrower than the top, which is typically about 20% wider.

"C" is the root chord of the wings. 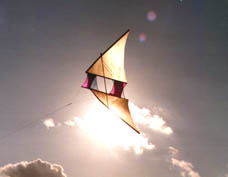 Since there is a pair of longerons where there is a single spine on a regular delta, their diameter may need to be the next size smaller than the size the spine would have been for the delta without the tunnel keel. Some care should be taken with their final fitting; the ends of whichever one is tightest must be carefully trimmed so that the gentle curvature of the wings along their length is the same on both sides.

The spreader is fit as for any delta, by measuring the off-clearance. If the cells are wide, and the nose angle isn't the narrowest, the diameter of the spreader may need to be two sizes up from the wing spars. Otherwise, a pair of string loops or sewn-on tapes at the longeron sleeves, can prevent the spreader from bending in flight.

This is self-evident - tie on some tough string. I use from 1.5 to 1.8 times the length of the lower spine.

Earlier I mentioned an elastic segment. This is an old trick, mentioned in a book from the 1920s. The hard part is finding the right bungee. The elastic goes between the rear of the cell and the bridle leg attaches to it, with a stopper loop of bridle line to prevent over-stretching. When all is correct, the kite will climb faster (because the towing point shifts forward), then settle at a certain position, and stay there. Deviations in wind strength are compensated for, and the kite sits uncannily stationary. I have only succeeded in achieving this once, but I haven't tried that often either; so I am not an expert. But I have seen a good elastic bridle on a 5 foot Eddy kite, and the Washington Weather Bureau rectangular boxes used them (in a different configuration specific to their bridling) to enable flying in a huge range of wind speeds.

When all is not well, the kite may refuse to climb. Or once up, the kite may constantly bounce or wobble. Then the bridle might not have enough "give" or range of movement. In other words, it can involve a bit of trial-and-error, but it's definitely worth the effort. 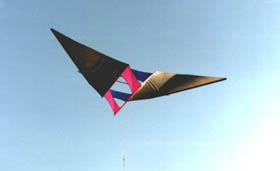 Deltas with triangular box center sections are usually called Delta-Conynes, or delta-pilots, depending on what country you're in. They are a bit more complicated to build properly than tunnel keels, but with good performance over a wide range of wind speeds they are justifiably popular and useful kites. As with the tunnel keel, virtually any delta wing shape can be separated by a pair of pilot or Conyne-style V-cells. The usual 1/3 - 1/3 - 1/3 works fine, but some experimenters feel that thinner cells and a larger opening between works well for them. John Loy and Harold Alexander have also concluded that removing the first 2% or so of the front Vee gives a performance improvement. This gives the V-cell a little overhang at the front which I have used at times on both front and rear cells to give the cells better inflation - it helps reduce fluttering of the rear cells (but I haven't noticed any performance difference whatever). The attachment point of the aft bridle leg is optional, and can be at either end of the cell or anywhere in between. On most Delta-Conynes, attaching the bridle at the very rear of the cell gives the snappiest handling; at the front of the rear cell, more stability and better tensioning of the cell, but anywhere in the middle works for many. If the wings are a non-standard shape, experiment.

The front attachment point is a different story. The usual front position can lead to difficulties. Why? Because in an unexpected strong gust the towing ring on the bridle can slip forward, and go too far, to an unstable position. Therefore I recommend using a point somewhere between the middle and the rear of the front cell for the front bridle leg. This way, when the kite encounters a large gust, the ring won't tend to slip too far forward - the front bridle leg will be close to a right angle to the kite (I didn't know this when I made the kite in the photos).

Once a towing point is established, an extra line from the front of the cell to the towing ring can be added, if desired. The purpose of this extra leg is to give better leverage when tugging the line in certain control situations; it's not usually necessary, but on larger kites a three-leg bridle can serve to prevent flexing of the lower spine by distributing loads more effectively.

This explains why my tunnel keel designs have such a large cut-back (when viewed from the side) - typically around 45 degrees. It puts the front bridle leg right at the opening. It helps tension the opening and also serves to better pressurize the cell, keeping its side walls smooth.