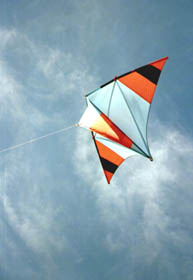 The History of the Delta

The delta kite was invented by an architect in Texas named Wilbur E. "Bill" Green. In the mid 1940s, inspired by a picture of a Chinese bird kite with a keel fin in "Life" magazine, he and a friend, engineer Raymond "Chris" Christiansen started by buying a bamboo fishing pole, which they split up and used to make their first copy. This turned out to be such a good flyer they were urged to make more to sell. With the help of Viola "Vi" Christiansen they were soon in the kite business, importing their own bamboo from Formosa. They had special saws made for cutting it and built the machinery to work it. Then, fortuitously for us (in hindsight), the US government stopped imports of bamboo from Formosa, because of certain unwelcome beetles it had in it!

So, Bill and Vi, with support from Chris, started again from scratch. Instead of copies of Chinese kites, Bill designed some new kites that didn't need bamboo: a patented winged box and a keeled kite. They began producing the latter in plastic, with the sticks glued onto the wings, under the name "Gayla", with "patent pending" printed on them. The patent, for a kite with a keel, was eventually granted in 1957. (Francis Rogallo's 1951 patent was for a design with no keel and no wing spars.)

The business expanded from a small vacant grocery shop to a large vacant supermarket with 15 employees making up to 400 kites a day. The original Gayla kites did not have tails - this was a matter of pride for Bill and Vi. (Certain kites, for example the flat hexagon, do have tails as an integral element of the design; what kite designers the world over object to is having to add a tail to salvage what should be a tailless kite.)

Someone else started calling these kites "deltas" (from the Greek letter). Presumably Bill and Vi hadn't heard of Alexander Lippisch's delta wing aircraft of 1943 - they only knew about box kites and two-stickers. Bill had worked out the structure of his new keeled delta-shaped design one day while out sailing. When he retired in April of 1961, he sold the Gayla company to his accountant, Les Phillips.

In 1963, Al Hartig ("The Nantucket Kiteman") started producing his cloth "Valkyrie," based on a Gayla kite, which he later patented in 1967. Soon kiters everywhere were making deltas large and small; some were very large. In the AKA (American Kitefliers Association) magazine Kite Tales Bob Ingraham produced two excellent pieces on delta kites for the Spring and Winter 1974 issues. Inspired by deltas made in Seattle by Jack van Gilder and Elliott Couden, which flew in a whisper of wind, Bob, at "AKA Headquarters," built three basic deltas with "experimental differences" from which evolved his "AKA 10th Anniversary Delta." His excellent step-by-step layout and construction procedure, described in the Spring 1974 Kite Tales, is still the procedure of choice for delta makers today. It eliminates any possibility of error in symmetry before it can happen, and ensures the proper camber. In a later issue, Bob even described a device for measuring the flexing of wing spars - a spring-loaded scale - so wing spars could be precisely matched.

At the time, the ripstop nylon 10th Anniversary Delta and similar deltas were referred to as "soaring" delta kites. In the decades before these deltas, kites needed considerable wind to fly at all. Kiters in the AKA in those days tended to live in places where days when the wind failed to blow in the "most desired velocity range for standard, long-accepted kite configurations, ...(were) far exceeded by days when they blow gently at the low level of the scale." So-called soaring deltas offered kiters the opportunity for the first time to get more enjoyment from flying kites, since they could now do it when the wind barely whispered. Light wind kite flying was quite a new thing in those days.

Of course, there are limits to what a lightly framed delta can do. The Winter 1974 article also mentioned how the three experimental deltas were "battered and bowed by incessant 12 to 14 mph winds." Nevertheless, the delta's future was assured as portable kites that rolled up for carrying; were easy to make, assemble and fly; could virtually soar during lulls, glide around in search of lift, catch thermals, and generally achieve prodigious flying angles and exceptional altitudes.

The delta kite did not evolve from a Rogallo wing. Gayla kites were in production long before a rigid frame was added to a Rogallo controllable parachute. Modern Rogallo-type hang gliders did evolve from the framed Rogallo wings developed for various purposes by US government-funded projects. Experimenters started making plastic and bamboo-framed Rogallo wings in the 1960s, and using them to glide down slopes for fun. The original Rogallo wings had a very low L/D, probably under 4:1. In any case, a rigid Rogallo wing couldn't fly on a single line as a tailless kite; nor would a hang glider. There are two reasons for this: for one, the center-of-gravity would be too far forward; but the primary reason is that the leading edge spars do not extend all the way to the nose of the kite and are free to rotate independently. This is the key feature that makes single-line deltas work. When a delta rotates about a vertical axis, the laws of inertia cause the wing spars to swing up on one side and down on the other; this creates a self-steering action. This shortening of the leading edge spars also conveniently serves to balance the center-of-gravity.