This is a new area for me, as a branch of falconry. All I had ever done before for bird scaring were kites with large eye shapes screen-printed on them for keeping birds away from seeded fields, but last winter I was asked by a falconer to make a kite with the silhouette of a falcon on it.

It was explained to me how gulls can get to be three times as toxic or infectious as a rat. They swarm over landfill sites in vast numbers. The falconer's job is to keep the gulls (and crows) away. He already used recordings of distress calls coupled with falcons on site, but one end of the site was so far from the other end, they couldn't cover the entire area at once. He and the man from the Environment Agency theorized that a falcon shape on a kite would be enough to keep the pest species aloft long enough for their energy reserves to drop to the point when they'd have to leave and find food elsewhere. This would take about 20 minutes. As explained to me, no bird feels safe when there's a Peregrine above him. They immediately want to get above it. The Peregrine shape is instantly recognizable from almost any distance, and that's all it takes to trigger the fear response. This won't work as a primary deterrent, on its own; the pest species would soon learn there's nothing to worry about. It's intended rather to reinforce the message of the primary deterrent - which is live falcons - in conjunction with the amplified recordings of distress calls. 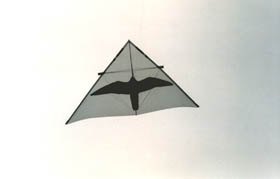 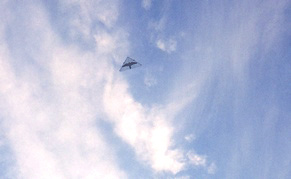 By golly it worked! A single kite acted like an invisible umbrella of protection 500m in diameter. In one amusing incident, a flock of crows hit their air brakes and reversed direction en masse as the kite shot up after a lull.

Although appliquéd to the upper surfaces of the kites, the Peregrine silhouette is also visible from below because the fabric's not opaque.

A person in the business of scaring away raptors and pigeons as well as gulls contacted me and described how his company had done considerable research in this area. According to him, the appliquéd falcon silhouette is not necessary. He maintains that it's the kite alone that's responsible for the desired effect, and not the falcon silhouette - that most species of birds are afraid to be below a kite in the air. Tests carried out by his company both with and without realistic falcon shapes showed no difference in effectiveness - that kites work equally well with or without any falcon shapes.

Furthermore, in his opinion brighter colors, especially red or green which birds' eyes are most sensitive to, work best, because they are most visible whatever the weather conditions.

A customer of mine has tried his usual bird-scaring deltas both with and without the falcon applique, and definitely prefers those WITH the appliquéd full-sized Peregrine silhouette.