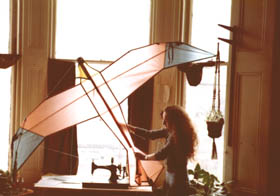 The earliest type of Round Pond bird is represented by Cyril's bird (right), which has the wing spar sockets attached to the wing tip stick by two strings. These sockets were a bit of alloy tubing, crimped and drilled and attached by two strings to the wing tip stick. Alick's earlier kites were made this way, and so were John Petty's. John Petty always flew from in among the trees, and he really put his kites through their paces; they were the Ferraris of bird kites; they could do snap 180deg turns and climb like rockets. 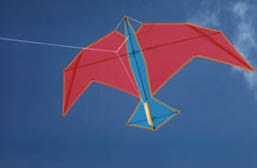 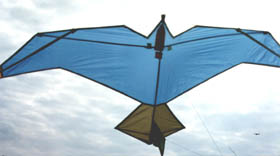 Alick loved to simplify. He simplified construction by "filling in" the outer wing area with fabric and sewing pockets directly on to the fabric. In my opinion this made the kites look... not so nice. The one on the right (above) is a later design without a separate body panel - it has one-piece wings with a separate tail piece. This was to fit the width of the ripstop and simplify construction. I believe it was Alick's last bird design; it is noticeably different from the earlier one on the left. The wing spars are set higher up, closer to the nose, which makes them very much shorter and therefore the kite is able to fly in a wider range of winds. The ones with the lower, longer wing spars would readily get bent out of shape, while the later one could fly in almost anything. 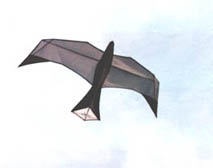 Bill had his own design (left), which featured long wing spars which had to be made from bamboo for strength. He never used ripstop, favoring a porous nylon or rayon lining material. His kites were very steady and reliable fliers. Bill also made his own version of a roller, which was longer than it was wide. 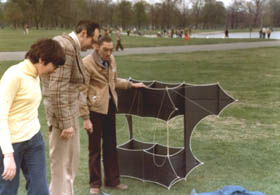 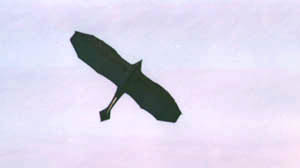 Nigel's bird has a different wing structure, giving a soaring hawk wing shape, by using short sticks at the wing tips. It took six solid months of trying before this one flew, but it got there in the end. 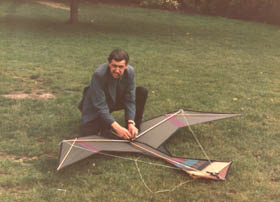 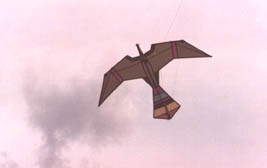 Albert (above) made every bird different; he favored longer tails. Bert never showed up on weekends, avoiding the other fliers (except Bev and I since I was there at all times). We were never able to find out why. His craftsmanship was superb; he made Bev a reel which hasn't got a single bolt showing anywhere on it. 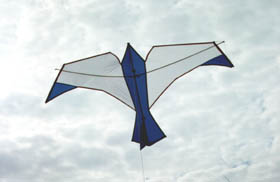 Hugh Blowers makes some of these bird kites today (right). Hugh's kites are accurately based on the Round Pond designs, but are made using ripstop with carbon spars. This one's from Bill's drawing. He also makes a very good Alick Pearson design.

My attempts at bird kites 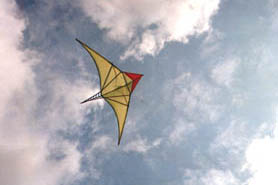 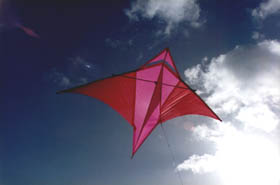 These top two are admittedly highly stylized, and only vaguely bird-like. They belong in the "design deadends" section. 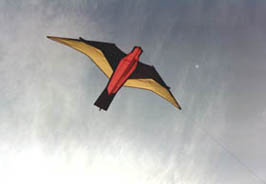 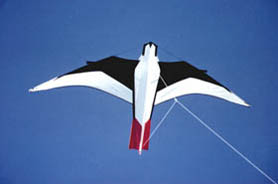 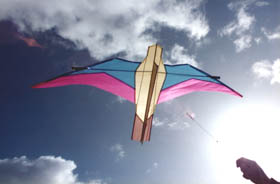 Being interested in deltas, I never got into making "traditional" bird kites. George Peters and Paul Morgan both made delta-based birds and I did try at one point about 15 years ago. My design could fly really well, with just the right "snap." But then one developed a lean, and when I replaced the broken wing spar with a fresh pair, the kite didn't fly at all right. I put it through a lot of changes, but it didn't like any of them. The design needs a lot of work. When my sole remaining falcon kite went missing from an exhibition, I never got started on further development. There were just too many variables. I couldn't say without trying each one whether it would fly or not, so I couldn't continue to make any for sale.