Early on, when I was busy constantly trying out new ideas one of the first things I did was make a pair of deltas with tapering inflated leading edges. It wasn't that they didn't fly (they flew very well) or look nice; they were just not quite as easy to build neatly in reality as they were to imagine on scratch paper. I made many different delta wing shapes with all sorts of odd cells in the center sections. 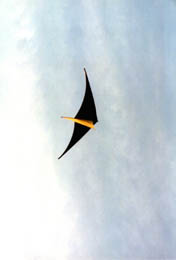 This kite dates from the 1970s. The idea is obvious; I thought the way to higher efficiency, or at least an illusion of it, was through ultra-high nose angles. At the time I thought high nose angle deltas looked more "advanced." The first one didn't fly at all; the next one did, but the performance and (especially) the handling left a lot to be desired. The only way it would fly was if the spine was as long as it is here in the pictures. 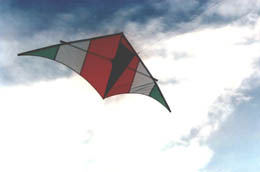 I kept at it, though, and followed that with some kites with the same 120 degree nose angle, but with more surface area. I could only get them to fly by applying clipped wing geometry. It can be seen that this meant very long, therefore too heavy, spreaders. I dropped this design altogether after assorted frame approaches.

We seem to have more photographs of experimental kites than production ones. But I had high hopes for these designs and some of them fly very well. 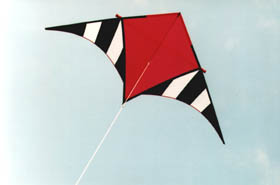 The so-called "Diamond Classics" were meant as an upgrade of the 345 designs I'd made for many years. On paper they should have been better, with more wing area on the same frame geometry. The frames are carbon. There are two sizes of prototype. Both Bev and I have had amazing high flights in zero wind (at ground level).

So why is it a dead end? It doesn't have to be, but there are several complications that have to do with maintaining symmetry during the construction. 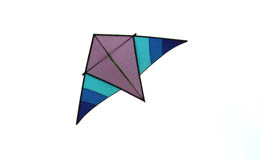 There's a similar problem with the extended keel kite shown here. I first drew this layout before I could mathematically work out towing points, and then later saw a kite at a kite festival vaguely similar to the one in the picture, which had this pattern of grain and stripes. I thought it looked good, so I made a couple. At the time I was also interested in the fact that the trailing edge was a straight line perpendicular to the centerline.

This last version had the fabric grain parallel to the leading edge and a smooth two-radius scallop for a clean assembly. The fin still needs work. 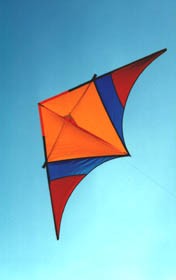 The problem is twofold. First, the way I lay things out, the exact line for the diagonal cut can't be located, because I work up from the wing tips to locate the spreader. But the outer part of the wing doesn't exist yet (working out from the centerline). OK, there are ways to get around this, but it can happen that parts get cut a little too short at one end or the other, which isn't apparent until it's too late. The second difficulty arises from the fact that the trailing edge has to be finished off in two separate steps, leaving one bit partially undone. It can't be done in one go, and so can't be done with precision - the left and right parts can't be located accurately, both halves the same. In other words, it introduces more opportunities for imperfections to creep in, and because a certain amount of puckering inevitably results from the sewing, the problem is compounded.

This led to the next step, a single two-radius curve, which solves the sewing problem, but adds some geometric complexity. The fins weren't easily sorted out, and the apreaders still needed extra central support. Ultimately, people couldn't distinguish between one of these and a Clipper. They didn't look all that different, but Clippers had none of the problems and were already sorted out. For the sake of an extra tiny triangle of fabric, the design wasn't easy enough to make without an extra level of uncertainty.

This last picture is of the bigger version. 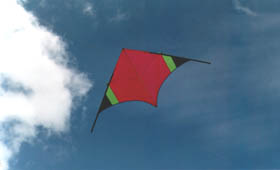 A related kite was an experiment with the shape of scallops. At first I left the wing spars at their normal length, in order to start with the same balance as a normal version of this geometry - the wing spars behave in much the same way as the long balancing poles used by tightrope walkers - and with the same center of gravity. Those long spar ends would catch the flying line whenevr the kite did a turn, so they didn't last long. After the spars were cut off, this design turned out to be very good in breezes between light and the sort that called for a Trooper, and as such logged up a lot of flying time. It's got a sudden cut-off point, though, and if the wind is just too much for it, it'll really let you know. It's another kite that could use some further experimenting with towing points and/or different fins. 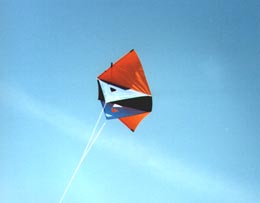 Putting delta wings onto a sled center seemed a logical way to increase lift compared to the delta wings alone. Sleds can fly with towing points set at the same position relative to surface area as deltas. The problem is that a certain towing point position on the sled isn't in the same place along its length as the same position on a delta. Working out a towing point for the combination is relatively straightforward, but in the air the two elements of the kite constantly jockey for different balancing points, resulting in a constant rocking motion as the pressure balances first on one section, then on the other, and back again. The solution would be to find a common towing point they both like, but I never did. The cut-outs on the kite in the pictures relieve pressure build-up in the center section, but don't cure the rocking completely.

I have seen a delta-winged sled that flew, but it had a very long, wide tail. 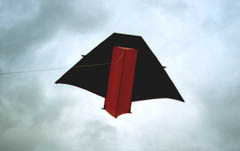 There are a few tunnel keels pictured at various places around this site; this one is one of the odder ones I tried, in order to assess balance, stability and so forth. 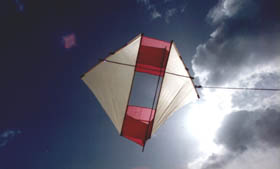 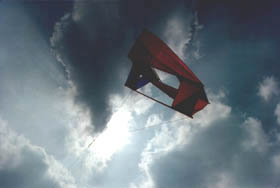 These kites were based on Harold Alexander designs, and were for a time my best strong wind delta derivative. However, for reasons I don't understand they didn't survive the transition from all-wood to combined wood and fiberglass. I still fly one that flies amazingly well, but every now and then I make one that will not fly at all, no matter what, and I have given up on them for the time being (because they've got me stumped). 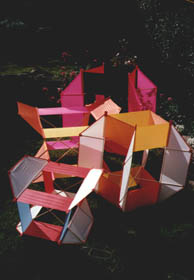 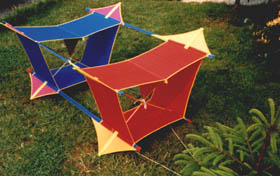 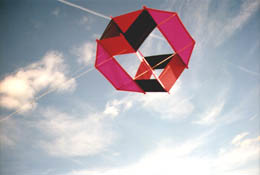 I always wanted to get into box kites; I used to draw them all the time. But I never found a construction I was comfortable with. After making traditional boxes using the standard construction, I did a series using full-length sleeves for all the longerons, and some sort of wings or winglets for the cross-member pockets. Unfortunately, this didn't allow for adjustments, and so sparring them up became something of a nightmare. For example, on the 6 wing box shown below I went through 36 longeron sticks before I got it tensioned right; each time I re-fitted the longerons the main cross-members had to be changed as well - it was a catch 22 situation. 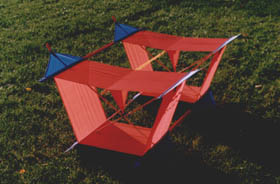 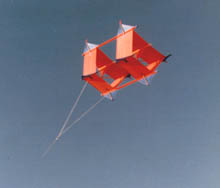 This cross section was inspired by a Harold Alexander design. In the end I decided it would perhaps have been better to have used a rectangular cross section to lower the center of gravity. I am proudest of the internal finlet that tensions the cells drum-tight when the cross members are fastened together at the crossing point, and also give the tops of the cells a bit of dihedral. 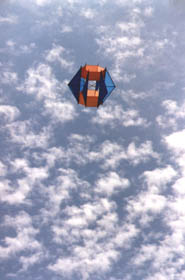 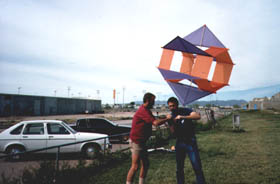 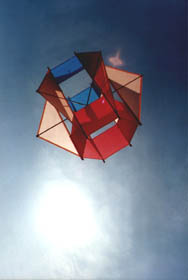 These have proved to be my personal favorites. The inspiration and some of the proportions came from an old kite book from the 1920s. I've used several bridling arrangements, but found the basic two-leg bridle as good as anything.

Fortunately there are a couple of makers of excellent box kites in the world. One who I've met and whose work I greatly admire is American Bobby Stanfield (unfortunately I have no idea of his address).

There have been lots of other types of kite Bev and I have made or experimented with over the years - from sleds to Wogloms to Eddys to other forms of boxes and cells - but deltas have proven to be our speciality. They're what we do best. Ultimately the fact that I can design them entirely mathematically must have a lot to do with it. I like that aspect of it almost as much as flying them.