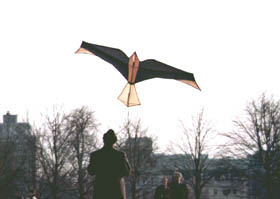 Among the crowd strolling by the sailboat lake in Kensington Gardens on a blustery Easter Monday, a holiday here, a few feed the ducks or watch the model yachts and a few chase after their dogs and children. But most stand with their heads tilted upward, shading their eyes, peering at a cluster of specks in the distance.

The keen eyed who catch the glint of strings in the sun can follow one down to a red bearded man in a duffel coat and wool fedora, standing with a nine inch reel in his hand, connected by 6,000 feet of string to his kite.

To say that John Petty, a London advertising executive in his fifties, is a familiar sight here by the "Round Pond" would be borrowing some British understatement. He has been here every day of a four day weekend from about 8:30 in the morning until after 6:00 in the evening with a kite aloft. Lunch brought out to him by his wife in a picnic case presents no interruption. He is here every weekend and holiday, in fact, and often after work on summer evenings when the light here lasts until after 10 p.m.

For Mr. Petty and his cohorts who stand hour after hour with backs to the wind, eyes aloft and reels in hand aren't your ordinary Sunday kite fliers. They were here on Christmas in the snow, flying their storm kites. And in summer, when hardly a breath stirs the oak trees in Kensington Gardens, they will launch gossamer things on frames built like feathers.

These are London's premier kite men, coolly competent, affable but reserved, solicitous of serious novices but scorning the casual amateur, enjoying one another's company but intent on their craft, disdaining to organize. "There are some who want a club, but most of us rather prefer anarchy," says Mr. Petty.

Bill Eadie, a sometime archaeologist whose kites are en route to Australia where he is heading on business, points to a father launching a paper, store-bought model. "Those are the bloody hazards of this sport," he explains. "You get one of those characters with a toy and his string crosses your line and, bang, there goes your kite." Even as he speaks, an amateur's line threatens Mr. Petty's; he dashes away to a safer position until the wind shifts. 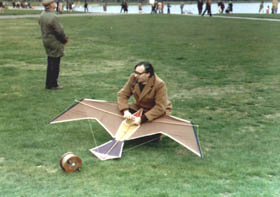 His new kite has cost him and his wife "thirty solid hours" of labor and kept him up until three o'clock this morning with last minute tinkering. He is understandably wary as another bumbling parent launches a whirring, red, yellow, and green plastic contraption nearby

"Kite flying is a combination of sailing, fishing and a little bit of horseback riding," says Mr. Petty. "You've got something live at the end of a line, you see. Some people fly for distance, but I go for altitude and stability. If you can get a kite stable in a high wind, then you've really got something." 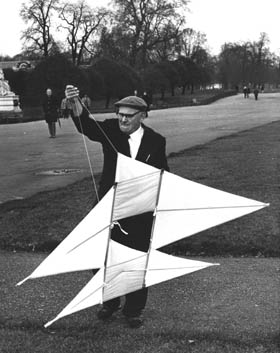 Indeed, Mr. Petty's and his friends' craft float serenely on the gusty spring breezes while the kites of the amateurs bob and swoop crazily, sometimes crashing in wreckage. The whirring toy, for example, plummets suddenly to the ground with a crunch. "Looks as if it's broken," says Mr. Eadie with ill-concealed satisfaction and relief.

Like many of the devotees in Kensington Gardens, Mr. Petty learned his sport from Alexander Pearson, a ruddy-faced, white-haired septuagenarian who launched his first kite in 1925 and has been designing and building them ever since. Mr. Pearson continues to supplement his pension by home manufacture of kites and accessories such as his finely balanced, ball bearing reels hand-crafted of plywood, plastic and chrome which sell for $8.40 each. "Two or three" kites a week go for prices ranging from $2.40 for his basic model to $25 for a large, custom-built craft.

Mr. Pearson lays claim to the calling of "professional," for he has flown kites in his day for "films" and photographers. A professional, he explains, wastes no time running back and forth to launch his kite. He simply selects the proper kite for the prevailing conditions, hands it to the breeze and then turns the string over to the photographers model when the kite is safely flying. His fee: "About three guineas ($7.56) for an afternoon's work." 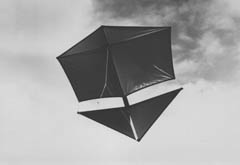 To the anarchical non-club of Kensington Gardens kite buffs, Mr. Pearson is combination outfitter, senior member and advisor. He measures the wind-speed with a pocket anemometer. Disputes over kite history and technology are referred to him with the assurance that "Alex will know." And it is invariably his lot to illuminate the fine points to inquiring newsmen. For, as he patiently explains, "kite flying isn't a child's game." -Neil Ulman