Lure your Falcon "Up"

For thousands of years falconers have used lures below the birds to train them to fly high - using kites to hold the lures above them is as effective as it is logical.

Pictures from 4 May 2002, Brecon Beacons Visitors Centre.
Because the wind was light, a small clip was temporarily attached to the kite line so we could use the 12'8" Skyhook - Dan 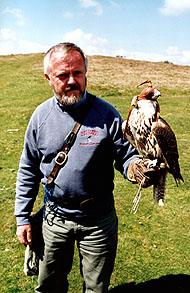 TO ANYONE THINKING about training a "game-hawk" for the first time, probably the most difficult aspect in their minds is how to get the falcon waiting-on at a reasonable pitch.

With traditional methods there is a lot of luck involved. If you are unfortunate enough to live in one of the flatter areas of the country, having got your bird to return promptly to the lure, the next stage is getting the hawk away from you so that it can: (a) learn to fly properly, and (b) achieve some sort of height so that you can serve it, in order to trigger the correct association with the falconer below.

Without the benefit of "lift" from hills or downs, these two critical stages may take a long time for the hawk to reach, and it's very frustrating to have your potential hunting bird fly around you in circles, and because it is flying with what the Americans call "hitch-winging" (that is, with it's wings turned down), it is physically impossible for the falcon to gain any height at all!

These problems are usually due to the fact that the falconer is always asking the falcon to come down to the lure, so often she sees little point in going up. With this in mind we can see that if we require the hawk to climb, we must provide her with an incentive to do so, and the easiest way is to position the lure above her with the aid of a balloon or kite: I prefer the latter for several reasons, but mainly because it's cheaper!

To those already using this method to train their falcons, I apologise if I'm teaching my granny to suck eggs. But for those of you who are thinking about it, I use the following routine (but please experiment as it's not perfect by any means)...

Having got the bird to fly in a straight line to the lure, I usually fly the kite over the hawk at about 50ft or so and call her to the lure a short distance (about 30yds) and allow her to feed. I repeat this exercise 2 or 3 times on the first day, and so far I have had very little trouble in getting hawks to accept the presence of the kite.

The next step is to attach a merlin lure (with chick) to the kite-line. For this I use a bit of fishing tackle, which is simply a small spring-clip, the tension of which is adjusted by screwing or un-screwing a small barrel-shape which the clip is encased in, (this allows for large or small falcons, and indeed for calm or windy days). The lure-line is attached to a small carabiner (a piece of mountaineering gear). The kite-line passes through this and the carabiner is held by the spring-clip. When the hawk binds to the lure it pulls the carabiner out of the clip, and the whole thing (hawk as well), slides down the kite-line to arrive neatly at your feet! That's the theory, read on...

The kite that I use is a delta kite designed and made by Dan Leigh, an American now living in Pontypool, Gwent. Dan has (shown me) several articles by Dave Scarbrough in "Hawk-Chalk," and exports many kites to his homeland, where they are highly thought of.

The advantage of this type of kite is that having got it airborne, it's pretty well static as regards sideways movement, and only gently rises and falls with the strength of the wind. Wind-strength has a bearing on the size of kite that you can use; where I live in the Welsh hills I use a kite which has about a 6ft span and this will perform very well in winds from 5-15 mph. (But for more technical details, contact Dan, via his article within these pages.)

But to return to the training. The first stage is to fly the falcon to the suspended lure, which is only about 5ft off the ground; when she binds to it assist her descent and allow her to feed. Pick her up and try again with the lure about l0ft up, and repeat a third time at about l5ft. Don't attempt to rush these early lessons, and for every increase in height, walk back a little so that the initial angles of ascent aren't too steep. The first l00ft is the most difficult, because it's at this stage that the young falcon is learning how to fly and to gain height efficiently. During this stage you will notice a change in her style and technique.

If the wind is only just strong enough to lift the kite, you will find that the kite-line is at a shallow angle, and if the falcon binds to the lure and then pulls it sideways, there will be quite a drag on the line and the hawk will find it difficult to pull it earthwards. But when the wind is quite strong, the kite will fly in a more vertical fashion and gravity will assist the falcon in bringing the lure to earth. 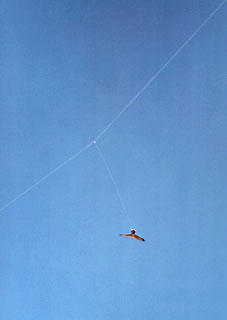 To overcome the former problem, you can use a pulley or another carabiner at the bottom end of the line, where it is attached to the spool (which in turn is fastened to a dog-spike). As the hawk binds to the lure, having already clipped the pulley over the line, you jog towards the kite, i.e. down the wind. This action has the effect of pulling the kite over your head, and therefore the line becomes more vertical and down comes your falcon. She may take a little while to come down, and may even release the lure and then fly back in for another strike, but don't panic, because this often teaches the falcon to be more tenacious with her footing.

By gradually increasing the height of the kite you should be able to get any falcon up to at least 1,000ft within a 3 week period. Initially flights should only be initiated in areas of uplift or "flat" wind and not in a downdraft. Later on, when the hawk has learned to go out to find lift, this rule may not apply. Beware of becoming a "kite-flyer" as opposed to a falconer - once your falcon is flying to around 1,000ft she has become pretty fit and should be introduced to game without delay.

This subject leads to the most often asked question regarding kite-training and that is: How do you transfer the hawk's attention from the kite to the falconer and dog?

My first experience was a humorous flop. My setter was on point on a small covey of partridge and June (my wife) put up the kite to about 7-800ft, this time without a lure. The partridge stayed put, after all this was an old method of taking them! Up went my Gyr X Saker tiercel "Odo." Having reached the clip on the line he gave it a clout of annoyance and carried on up to inspect the big blue kite. After a few circles he got fed up and started to drift away from the kite, and towards the partridge. Nothing to this I thought! Ha, bloody, ha! In went the dog, out came 5 greys, and off went the tiercel. The trouble was he was off in pursuit of a blue paraglider about a mile away and 2,000ft up. He hadn't looked down, and hadn't seen the covey at all!

About 5 minutes later he came back in over me at his newly-gained height and stooped! Wow... from 2,000ft to the fist in one move, very impressive I don't think.

A couple of days later the instructor from the paragliding group, who's a friend of mine, met me in the high street and laughed as he told me of the falcon who had screamed at the owner of a blue parachute, flown around him a few times and then buzzed off again.

So I sat down to think this one out. I had to get the falcon to go up, but then look down. Feeling that I was back-tracking somewhat, I resorted to more traditional methods.

For several days I hiked to the steepest hill with the strongest wind blowing up it. There with the aid of up-currents of air, Odo learned to fly without the visual stimulus of the kite, and because of his fitness and the weeks of upward flying, off he went, often in excess of 1,200ft, and from there I would bring him down to the lure. Some of the stoops he performed were incredible, and over a period of days I gradually flew him from further down the hill, and he learned to range out great distances to gain lift and pitch, to be rewarded on his return. Now, I thought, he's ready to fly at game - and he was!

His first flight at a cock pheasant was amazing; from around 800ft he rowed down and bowled the cock over and bound to him before he could recover. I ran the l00yds to him, but I needn't have bothered, the pheasant was dead... These hybrids sure are aggressive!

So, my early conclusions, gathered from training 3 hunting falcons and 2 display falcons to the kite are: that it's a great and dramatic way of training a falcon - it gets them fit, teaches them to fly, gives them an air of independence, but should be complemented by some traditional methods in order to strike the right balance.

reproduced with the author's permission from "The Austringer," 1998