The sport of falconry - using falcons, hawks or eagles to catch game - has been in existence for several thousand years. Its traditions and techniques were established early on and have continued virtually unaltered over the centuries. 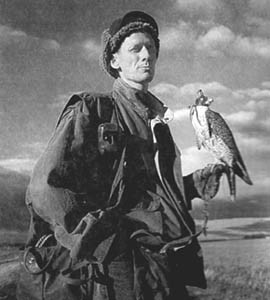 Something innovative has recently changed the sport for the better - the use of high-flying kites for training purposes. And the inventor of the technique, Dr. David Scarbrough, of Fairfax, Missouri, remembers the very moment of his inspiration.

"I was parasailing - something I had always wanted to do - on Martha's Vineyard in Massachusetts on July 10,1994," he recalls. "A falconer since my teenage years, I had always wanted to see what the earth below looked like to my birds as they cruised along. There I was flying at 400 feet, finally getting to see and feel just what my falcons saw and felt. Then I looked up at the shroud lines and I realized the parasail was just a kite - a big, fancy kite. I made a mental note. 'when I get home,' I said to myself, 'I'm going to investigate kites as a training device for my birds.'"

The point is that falconers want their birds to fly at a high "pitch" or cruising altitude, up to 1,000 feet. When they "stoop," or dive, from heights, they attain speeds up to 200 miles an hour. This is the fastest any creature on earth achieves. And the sight and sound is thrilling.

"The bird descends on its quarry like an arrow shot from the sky, its passage through the air making a ripping, tearing sound, particularly when the bird starts braking with its wings," says Scarbrough. "You watch and listen and marvel. They move almost too fast for the eye to follow. They'll hit a target - a pheasant maybe - so fast they won't grab for it, realizing they'd tear their legs off, they're going so fast. They'll just give it a smack. That's often enough to kill or stun. There'll just be a puff of feathers. The whole sequence is absolutely spectacular"

But why kites? Well, the problem is many birds, most of them in fact, naturally cruise at a low altitude. They have to be trained to fly high. How to get them to do this has constituted an age-old problem.

A logical solution presented itself some decades ago: suspend a training bait from a tethered helium balloon. This technique was used by biologists working in the Arctic seeking to attract falcons from great distances away so they could be captured, banded and released for later study. The problems with balloons, however, are manifold. They are expensive to buy, easily damaged, costly to fly because helium is expensive, unwieldy to transport and store, and mainly they get blown flat when a wind comes up.

"I live in the Midwest," notes Scarbrough. "It's windy here," he adds dryly.

Scarbrough, a dentist by profession, tried balloons himself and met with all the problems and frustrations. Returning from his New England vacation and not knowing anything about kites, he called around seeking experts who could advise him and soon discovered people like the proprietors of the Into the Wind shop in Boulder, Colorado. He began experimenting with various types of recommended kites.

It soon became clear these age-old devices were the answer. Relatively inexpensive, kites could be used for years, packed way down for easy transportation, and mainly flew high and well in wind conditions from calm to well above gale force.

After a lot of experimenting, Scarbrough hit on the delta model kite as ideal. The delta has a triangular sail for lift and triangular keel for stability. He soon acquired low, medium and high wind models, with accessories, such as tails, to tailor the kite to the exact conditions prevailing on a given day.

The falconry cult around the world is relatively small in number, but intense in interest, and word of Scarbrough's highly successful experiments soon got around the globe, aided by the Internet. Kitemakers such as Dan Leigh, of Gwent, Wales, designed high fliers specifically for falconry and a modest business boom in these ensued, and has continued.

Asked how he became interested in the first place, Scarbrough cites a book he read as a 9-year-old in which a boy uses a falcon to hunt food so he can survive in the wild. Some years later, Scarbrough had a classmate who knew about hawking and taught him the basics. Scarbrough was soon a dedicated falconer. "Since then, I've never been without at least one bird a flying season," he says, "even while going to graduate school in Kansas City."

For falconry, a generic word, four different types of birds can actually be used - falcons (longwings), the two different types of hawks (short-tails and broadtails), and eagles. "Eagles are not practical," says Scarbrough. "They are just too powerful, too dangerous."

Scarbrough has flown hawks - Goshawks and Cooper's - but finds falcons more interesting. "They are more highly evolved, more specialized. They have more stamina and speed, they act differently than hawks. They think more like humans. Hawks kill by ambush and surprise, falcons simply outfly their prey."

While there are some 40 species of falcons worldwide, there are just five in the United States, six if a Central American species that sometimes drifts north is counted. The gyr (pronounced "jer"), with a four-foot wingspan, is the largest, the peregrine next in size; the smallest is the one-foot kestrel, known to all as the fierce little raptor that hovers over highways searching for mice or other small prey stirred into action by passing automobiles.

If one wants to be a falconer in the United States, one needs to get state and federal permits. (A few states, such as Hawaii, do not permit hawking for biological or other reasons.) Since there are only 4,000 people who have the necessary permits, conservation officials permit unlimited hunting by the birds, partly because the kill is minuscule, and mainly because birds must be flown several times a week to remain in condition. Falconry is practiced from fall to spring, then the birds molt and breed and are left to their own devices.

How does one obtain a hawk or falcon to join the sport? There are three ways - taking a chick from a nest and raising it, the country boy's method; trapping a self-sufficient wild bird; or buying a hatchery-raised chick, even a hybrid at up to $4,000 each. Gyr-peregrine crosses are particularly popular since they combine the larger size, power, and intelligence of the gyr with a tendency to fly higher and adapt to training more readily by the more patient peregrine.

Training consists of suspending a bait from the kite line. When seized by the bird, it releases from the line and is then eaten by the falcon. A piece of hatchery-raised quail, ordered through the mail and kept frozen in the refrigerator, is the usual lure. Training starts at low altitude and advances higher and higher day by day. A bird may get up to 1,000 feet within a week or so. "Higher than that is pointless," says Scarbrough. "You can't see the falcon, and what fun is that?"

Living in a part of the country where 98 percent of the land is devoted to agriculture, Scarbrough can more or less fly his birds where and when he wants. He says he is completely accepted by area farmers as harmless, if eccentric. Father of three, he reports only his 5-year-old son seems taken with the sport. Otherwise he goes out alone, with the occasional spectator to observe and marvel.

"In 27 years of training and hunting with falcons, I have seen many innovations," he says. "Few techniques have been as enthusiastically received as the use of kites for training. I expect them to be an important tool for falconers for a long time to come."

Five years after that insight while parasailing, Dr. Scarbrough can look back with pleasure and great pride, realizing he has made an authentically profound impact on a sport he loves.